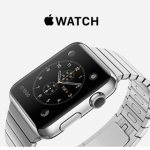 If you’re making media, are you making media for today? Tomorrow? Are you developing for the Apple Watch? Google Glass?

Some devices are game changers. The iPhone and iPad certainly were. Soon after the iPhone’s launch, it shot to nearly the top in Internet use among smartphones. AT&T got a windfall in sales and bandwidth usage. With the iPhone and iPad, media companies soon felt they had to develop apps, and — in at least some cases — optimize their websites for use on the devices. There’s a reason YouTube has a highly developed iOS app, and that so many sites now run video on something other than Flash (which the Apple mobile devices don’t support.)
Now we have the Apple Watch. Is it a game changer? We’ll see. A lot of the features shown today in Apple’s news conference certainly got a “wow,” at least in the auditorium where Apple execs showed it off.   One  exec showed off apps to swipe through photos, check movies and buy tickets. CEO Tim Cook said he uses his to control his Apple TV. His mention of the device’s haptic feedback to someone walking based on their location got applause. Apple surely drove tons of traffic to iTunes (and a few more subscriptions, I’m sure) by giving away U2’s new album.

What opportunities are there for media companies, beyond commerce, feedback, control and display? What media can be created that leverages it all? How can the device itself be used to create? Cook spoke of an Apple employee who likes to use the watch as a viewfinder (presumably hooked to his iPhone while he shoots images). What happens if you combine location with utility and ease of use, and simplicity? How does wearing the device on your wrist change things?

A media exec I respect suggested to me that future media creators need to look at Google Glass, but I don’t see it around the office or parties where the cool kids are — except for a few of the really connected, super-tech cool kids. Not the rest of us who’ve gotten to try it out but don’t feel we have to fork over the bucks to own one, today. But suppose millions of Apple Watches are sold, that Apple gets its requisite share of the wearables market, and solidifies its hold in smartphones (the watch works by hooking through the iPhone to the Internet and Apple’s iCloud). Will media creators be able to capitalize, to get media to the eyes and ears (and wrists, through haptic feedback) of the mass of cool kids? Are there media you can make with the watch, for the watch, that no one else has? For other wearables?

(Update:) Can you imagine, say, a media experience that incorporates location and the haptic feedback for fun? Maybe even Google Glass or some sort of Oculus Rift headset (or whatever Apple comes up with to compete). Imagine a treasure hunt with augmented reality media, which buzzes your wrist as you get “warmer” or “colder” in searching for the treasure. Perhaps you have to make media, insert your characters or answer questions, or create new things, to progress in this mashup of real and virtual worlds. Perhaps your watch plus something else lets you interact with fictional characters in real locations.

Forgive me, now, for bringing it back home, but answering these types of questions — what can you create? —  is one promise of the MediaThon. We ask our community, the participants to make media in ways they see fit, without dictating the format or the medium. Text? Sure! Photos, video? Yes! Apps? Great! Plugins, APIs, combinations of all of them, and stuff we haven’t thought of before? Exactly. Perfect, love it. What media are there that are the most powerful combinations of creative inspiration, technical acumen and boundless energy? We’re finding out.

< Take the Civic Science Challenge at the PNA MediaThon! > Mazlow’s iHierarchy of Needs