Humor, comedy, stuff that makes people laugh, or is about that. 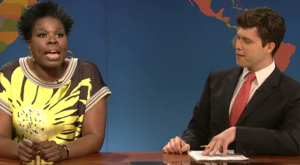 She did it. She stands up for it. And if you haven’t seen the video, or the Twitter storm around it, go take a look. She made a loud and maybe too long (first time THAT’s ever happened on #SNL (!) ) joke about beauty and race and our concept of it here in “modern” America, talking of her trouble getting dates, and referring (har!) to how much better it would have been under slavery.

She made a free choice* to say what she said and is getting tons of crap for it.  Not only is her bit getting magnified (that’s the social-verse for you) but as her Twitter followers ramp up, she’s amping up. She’s actually answering idiots saying offensive sh— about her on Twitter, instead of ignoring the trolls.

My take: She did a mashup, old style, melding flashpoints of race and culture, and style, and turned it all around, in a 90-second clip that made my hair stand on end a little,  and made me smile in spite of myself. I didn’t know her before #SNL, and dunno what her schtick is like as a standup. Doesn’t matter. This was a defining moment.

*OK, what she did on TV was not a completely free choice. She is on network TV. It’s not like anything on that show happens without producers and censors and sponsors and a raft of others taking a stake.

But, still, it was her choice to work there and go on air and say what she said. By taking it to us not only on air but also on Twitter, she’s taking ownership and telling us where she stands. She’s not hiding behind any bosses, and is, well, standing up.

I didn’t exactly love the piece, but it was great media. I admire the courage. Thanks Leslie.