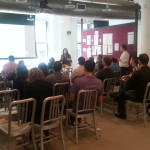 The inaugural Mediathon was held on September 21, 2013. The assignment was as follows: In teams of 3-4 people, produce content that humorously addresses the topic of: “The Do’s — and D’Oh!n’ts — of Getting, and Holding, Political Office”

With Anthony Weiner, Eliot Spitzer, Mark Sanford, former San Diego Mayor Bob Filner, and an ever-growing (and sadly amusing) cast as a backdrop, the assigned task is to create media in a format or formats that can be consumed in two minutes and will, with humor, talk about what one should(n’t) do if running for or holding public office.

The Result: Five hilarious pieces of media — three satirical videos, an app that tells you which sleazy politician will most appeal to you, and a tool that lets you report on the questionable doings of politicians shared socially and to news organizations.

The winning team, BzzBit, came up with a hilarious video about an exciting new product for policing wayward politicians.

Team Pornoticians created an awesome app that lets you shame wayward politicians using social media sharing. Follow the link to try it out!

President of the Poynter Foundation and Vice President for External Relations. Previously Martin served as VP for University Relations at WVU, and is the former Dean of WVU’s Perley Isaac Reed School of Journalism. During her tenure at WVU, she established the nation’s first online master’s program in Integrated Marketing Communications, and developed a nationally recognized journalism-based and content-driven communications hybrid that combined trans-media documentary storytelling, interactive marketing and emergent media relations. Martin speaks nationally on public relations, interactive marketing and emergent journalism and media.

Founder and principal of Galex Media Group, a full-service television, film and video production company. Launched in 2012, the company has produced content for BET Networks, PBS, ESSENCE Communications, among others. This year George executive produced and directed the video tributes for ESSENCE magazine’s Oscar week celebration, and he is currently a producer on PBS World Channel’s “Your Voice, Your Story.” A former editor-at-large at Black Enterprise magazine, George has also written for The Huffington Post, CNN.com, AOL, Inc., Daily Variety, VH1, The Biography Channel, ESSENCE, Ebony, HBO.com, among others.

Founder and CEO, @RebelMouse and @SohoTechLabs. Was CTO of @huffingtonpost. Advisor, Digital Board at American Express OPEN. Father of 3.

Chief Creative Officer, MRY. Prior to the merger of Mr.Youth and LBi to form MRY, Cedric was the Executive Creative Director of LBi US, which he helped start in 2000. Before that, Cedric lead the creative vision at Tribal DDB NY for almost a decade. In his spare time, he co-founded the US Air Guitar Championships and produced Air Guitar Nation documentary. He also co-founded, Schmedlines, a popular daily news headline writing competition.

Dorian Benkoil is an accomplished media and technology executive, lecturer and columnist, and co-founder of Teeming Media, a Digital Media Management consultancy. An award-winning journalist, Dorian frequently writes, teaches and speaks publicly on cutting edge media and technology issues. Dorian was a foreign correspondent and reporter at Newsweek, The Associated Press, ABC News and ABCNews.com.