“On the Media” co-host Bob Garfield was off last week from the show, but he got my attention today with a stream of “link bait” that I can only assume was joking, or at least (and this would be in character for Bob) meant ironically.

Garfield is trying to raise $38,500 through Kickstarter to launch a series of e-book interviews with MacArthur “geniuses”. To get traffic to the page, he loaded his stream with a series of Tweets that mirror classic tabloid techniques. 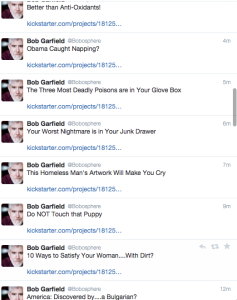 I can’t object. Or at least, I’m not objecting to the bait and switch. It’s a bit meta, right? Use base tabloid headlines but offer something that may be worthwhile and enlightening — in exchange for a cash donation.

For those of us who know Bob, we get the joke — he’s making fun of the genre even as he’s doing something serious and potentially worthwhile. For those who don’t know him, it’s probably a bit puzzling. (“Why does the headline refer to Obama’s misdeeds or puppies, but I go to a page about MacArthur fellows?”)

I’m all for pushing the envelope and playing with forms. (The MediaThon’s mission is to “interrupt the status quo” and break down barriers, after all.)

This one feels a tad tilted, right now. But what do I know? If Garfield spurs an argument, and therefore enough attention to get the project off the ground, he’ll be proven right. And, in the bargain, he’s spreading his financial risk, without having to offer anything other than the media he’s hoping to sell, and getting some marketing “oomph” in the process. When it works, that’s the financial genius of Kickstarter. (I do wonder if this kind of linking affects Kickstarter’s SEO or “authority” ranking. Garfield gets to have his joke, and spread the technological risk, as well.)

We’ll see what happens. I’m looking forward to watching, and seeing if the project reaches its goal.  I’m donating. Maybe that’s the 2014 analogy to buying a share in a company you want to follow. Maybe later I’ll ask Garfield and his minions to do the same for me.

< Off the Media*: Brooke Gladstone, Media Nihilist > And The Pittsburgh MediaThon Winners Are ….